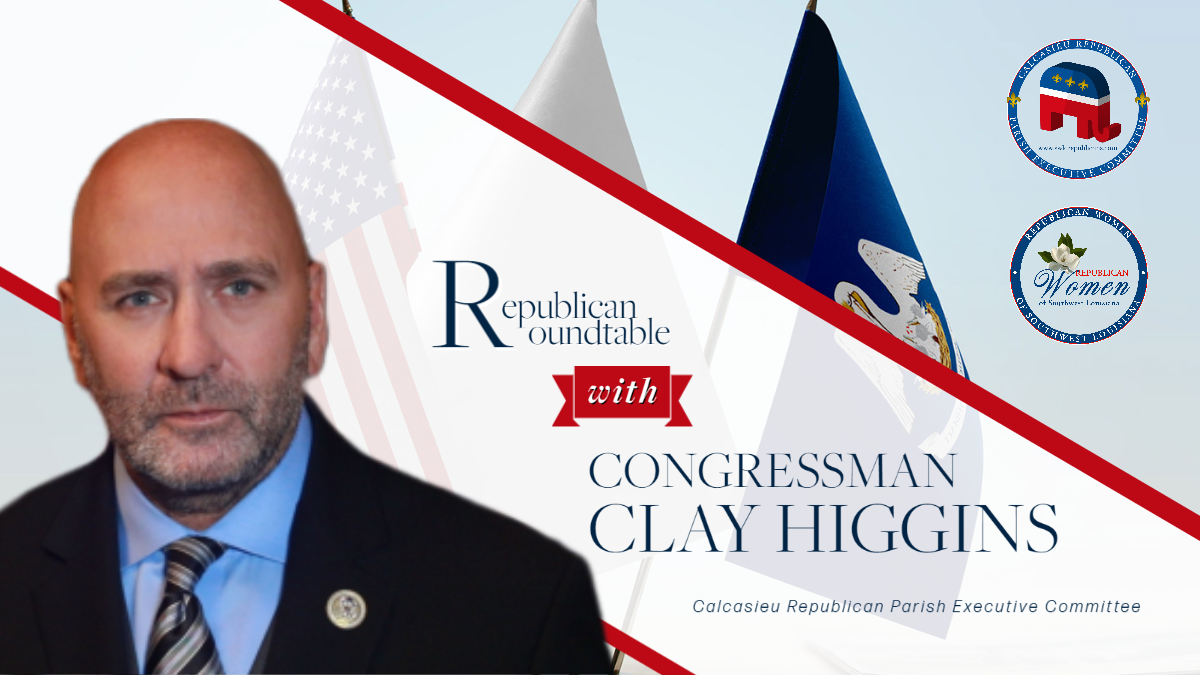 What: Buffet Lunch at the Lake Charles Country Club - Cost $25
When:  Thursday, October 6th, 2022 - 11:30- 1 pm
Where: Lake Charles Country Club
​
Ticket purchased on this website will use the order confirmation receipt that is emailed to you as your ticket. Please check spam folder if you do not see it in your inbox, or email swlarepublicans@gmail.com and we will forward your receipt to you.  We receive confirmation of your purchase immediately.
Purchase Ticket on this Website
Purchase Tickets through Eventbrite
To reserve seats and pay at the door, you must include Person responsible for the reservation, number of Attendees, ​Phone Number, and Email Address.  Reservations not canceled by noon Monday, Oct. 3rd, 2022 must be honored.
Pay at the door Reservations

Captain Clay Higgins is a Republican member of the U.S. House of Representatives representing South Louisiana.
Raised on a horse ranch, Clay Higgins' South Louisiana roots run deep. After graduating from high school, he attended LSU and then went on to serve in the United States Army/Louisiana National Guard as a Military Police Officer, and he attained the rank of E-6, Staff Sergeant.

Higgins had many successful years in business but returned to uniform service as a street cop in 2004. He worked patrol, primarily night shift, and he was a well-known SWAT operator. Prior to joining Congress in 2017, Higgins is best known for his Crime Stoppers videos for the St. Landry Parish Sheriff's Office. The program was one of the most successful in the history of law enforcement. Most of the featured crimes were solved and what was most significant was that many of the suspects responded to "Uncle Clay's" message of redemption and turned themselves in. Captain Higgins continues to actively serve the Thin Blue Line retaining a valid Law Enforcement commission and his Louisiana State POST Certification.

As a veteran and highly decorated law enforcement officer, Congressman Higgins continues to protect and serve in the nation's capital. He is a member of the House Homeland Security Committee and the House Oversight & Reform Committee.
​
A committed Constitutionalist, Congressman Higgins believes in restoring the federal government envisioned by our Founding Fathers. Higgins believes in smaller government, less bureaucracy, free markets, a strong national defense and securing America's sovereign borders. From Morgan City to the Texas line, Higgins has sworn a sacred oath to protect and serve the people of South Louisiana.